INTERNATIONAL CAMPAIGN ON THE RIGHT TO IDENTITY II

Did you know that the Argentine Government, the Grandmothers of Plaza de Mayo and relatives are still looking for more than 350 granddaughters and grandsons who live with their false identities? 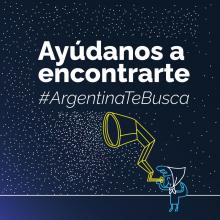 On November 28, 1978, Gertrudis and her 8-month-old daughter were kidnapped in Buenos Aires.

Grandmothers of Plaza de Mayo together with the relatives started a legal case.

In 1999, a young woman was summoned by the judge to carry out DNA studies. She had been registered as the daughter of a member of Army Intelligence and his wife.

At the end of 1999, the National Genetic Data Bank informed the judge that it was Claudia Victoria, daughter of Marta and José.

Laura was kidnapped on November 26, 1977 in the City of Buenos Aires, two and a half months pregnant.

In June 2014, a young man who had doubts about his identity contacted Abuelas via email, and they subsequently gave CoNaDI an intervention to carry out DNA studies.

Ignacio long ago had doubts about his origin, however he was able to confirm that he was not the biological son of those who raised him from a confession of someone close.

On August 5, 2014, the National Genetic Data Bank informed CoNaDI and the Justice that this young man was the son of Laura and Walmir.